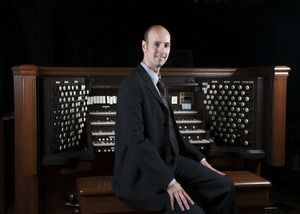 Enright’s interest in the organ art has taken him to organ academies in Europe, such as those in the Netherlands (Haarlem) and Smarano (northern Italy), as well as the McGill Summer Organ Academy (Montreal). In 2005 he was awarded a trip to France to play on famous historic organs and to meet eminent French organists.

Noted for his improvising in the liturgy and in concert, Ryan’s style is influenced by French Impressionist harmony, baroque counterpoint, and a North American je-ne-sais-quoi. Ryan is organist of St. John’s Lutheran Church in Sacramento and accompanist for the Sacramento Choral Society & Orchestra, the CSUS choruses, the Schola Cantorum of Sacred Heart Church, as well as being a free-range musician. A favorite interest away from the loft is exploring California’s diverse wilderness areas.